In June 2020, Dionne Sims sent a tweet that quickly garnered fierce support from the community and raised over $110,000 in crowdfunding in two weeks. “Minnesota doesn’t have a Black-owned bookstore. I think that’s my new dream,” she said. Less than two months later, she left her corporate job to found Black Garnet Books—a Twin Cities bookstore filled exclusively with texts by Black and racially-diverse authors. In this conversation, Dionne shares about how she’s managing becoming an overnight spotlight entrepreneur, the healing power of a story, and what books she’s currently reading.

At the time of this interview, Black Garnet Books is operating online and through temporary pop-up shops.

How was the vision of Black Garnet Books born?

Once I was made aware of the absence of a Black-owned bookstore, it was like a black hole that was sucking me in. Reading, literature, the pursuit of knowledge, and the ability to imagine and escape, are all things Black people need. I know that bookstores are a way to do that. So I tweeted about wanting to start a bookstore, and a bunch of people said, “Do it!” From the moment I thought about it, I knew the store was going to be an intentional community space, heavily used by youth, and would focus on young adult and adult genres. Surprisingly, nothing about that vision has really changed as I move from the visionary stage and start to cement what is actually possible. It’s been really encouraging to not have to alter my dreams very much in order for this bookstore to come to life.

Why do you want to have a physical bookstore rather than just sell books online?

Currently we are open online, but we're working toward having a permanent space because I believe in the power of intentional spaces and naming what it is that you want a space to do. For me, I want people to use Black Garnet Books to connect with the community, to plan, to organize, and for people to know that it’s safe for those activities. When I moved from Minneapolis to Saint Paul, I started doing work with Root & Restore, an organization that helps restore communities impacted by police violence. One thing I’ve learned from being a part of the activist community is how important it is to have spaces to create visions that are the foundation for activism. It’s vital to know there’s a place you can go where you’re not going to be considering loitering if you can’t afford to buy something, where no one is hawk-eyeing you. Unfortunately, there aren’t many of those spaces that exist. A lot of organizing happens in backyards and outdoor spaces, so I want to build a comfortable space for people to be in and find resources in the form of books.

How are you navigating starting a business that has garnered so much attention?

There is so much pressure to move fast, quickly, and to do so without making any mistakes. To have online sales up, have a pop-up location, move into a permanent space while I can capitalize on all the interest in the bookstore. But I’m just one person, and I can’t do all of that. I would make a lot of mistakes if I did. I’m really fortunate because my support system has been able to provide me with help in many practical businesses functions: bookkeeping, legal matters, or finding a temporary pop-up space—everything is coming together quickly but only because my friends and family are strong and tight with me.

Starting a business is a demanding thing, how are you taking care of yourself?

I am leaning heavily on my support system these days. They really help me keep this all in focus. It’s hard to have an ego when my friends are right there to remind me that I’m not that big of a deal! With so many demands on me personally and professionally, it's been pivotal to talk with people I trust and admit when I don’t know what I’m doing. I’ve learned to notice when I’m rushing and ask myself, “Where do I need to slow down in order to take the best next step?” 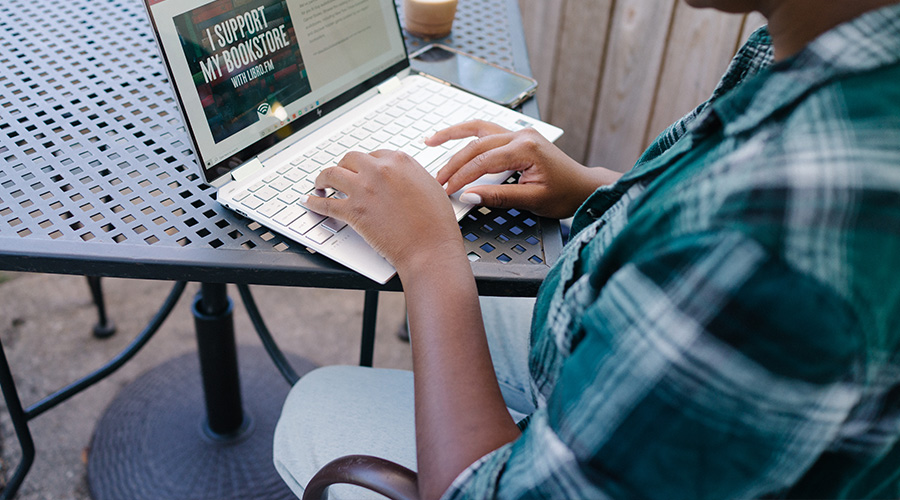 Why does reading books by racially diverse authors matter?

I grew up reading almost exclusively white authors. They usually had the best covers and they were often the ones featured at the library. I had to be very intentional if I was going to find a book written by a Black author; I would write down their name, the title of the book, and try to find it on a shelf. Books written by racially diverse authors weren’t easy to stumble upon. So, I grew up without having the kind of imagination white children had. White kids could imagine themselves as the main characters in the books they read, but I was always reading about a white person. If I was in the story at all, I was the best friend or another side character—so it was never my story to tell; it was my story to witness.

I think when you grow up constantly witnessing other people’s stories, you forget that you yourself have a story to tell, and your story matters.

It stunts your own emotional growth because you have no practice sharing your story. I think the impact of a bookstore where every book is written by a non-white author will strengthen kids’ imaginations and emotional growth. And it’s not just for the kids, but for adults too. There’s that possibility to see themselves reflected in a story with as much breadth as a Harry Potter or a Hermione—and that possibility really inspires me.

Why do people of color need to read books that reflect their own experiences?

Books for me have always been healing. I think because it’s a mode of escapism, but to have that escapism tied to your personality and your identity has a lot of power. So when I read a story where all the characters are Black, I can see myself and my family in those characters. I don’t have to change anything about the story to do that. It’s just—everyone in this book is Black. Their emotions are relatable, the way they talk to each other are relatable. Being able to find that relatability in a book even if you’re not able to find it in the real world is really healing.

Even though reading is an individual act, books themselves are a communal act because you know there are hundreds if not thousands of other people reading that story too.

They are also feeling the emotions you’re feeling, and you can know that the author can relate to what you’re experiencing. That is a profoundly healing concept. It can hold you when you’re feeling alone or helpless, which I know a lot of people are feeling right now. Books bring people together through shared experiences.

What do you hope will come as a result of Black Garnet Books being part of the Twin Cities?

Honestly, my greatest hope is that it becomes a staple just like other bookstores in the Cities. Even though I’ll be selling books by Black and racially diverse authors, over time I want this to become normal. I know that the reason this has garnered the support that it has—monetarily or press—is because it is the only one. But I truly want the novelty to wear off. To me, that says Minnesota has not only accepted it, but embraced it. To me, that says that Black businesses are a part of the ecosystem. That’s my long-term goal, but in order for that to happen, there has to be other Black-owned bookstores. I know that Black people aren’t a monolith; my store is not going to carry all the books they’re interested in reading. The theme won’t be what everyone’s interested in, or the feel might be too modern or too cozy for someone’s taste. I want there to be more Black-owned bookstores because I want people to have more options. The Black community should have more options.

What are you building?

Literally I'm trying to build a bookstore, and we're hoping to have our temporary location in place in a couple weeks. But more than that, I want to build a place where adults can go to feed their inner child, a space that they feel seen in, held in, and like it was very intentionally made for them. Now as an adult, I can see that my childhood wasn’t an anomaly. There are so many kids who currently feel the exact same way I did, who are desperate to get their hands on any books and any stories they can. What I want to build is a safe place for that to happen. My inner child just glows when I think about having that space set up and looking at every single book on the shelves filled with stories of diverse writers. We deserve that. Black people deserve a space like that.

What drives you to get there?

I don’t know if anything drives me more than the feeling of, “We should have this already.”

I feel so strongly about Black people’s quality of life, and how books can be part of improving that. From that place, I’m motivated to make this bookstore happen, and happen sustainably. I don’t believe I’m the one who needs to do it; I think any Black person who loves literature and wanted to start a business could have done this. But it just happens to be me, and it brings me a lot of joy and fulfillment. This process of building Black Garnet Books into a staple Twin Cities bookstore is worth more to me than any stable paycheck.

Finally, what are you reading right now?

Currently, I’m reading the sequel of the book that inspired me to love reading again, it’s called Children of Virtue and Vengeance by Tomi Adeyemi. But I also just finished a book called Juliet Takes a Breath by Gabby Rivera about a Latinx teenager navigating new experiences when they move from the diverse area of Bronx to the very-white city of Portland. Honestly, I still mostly read YA. I think I’m working my way through all the YA I missed while I was in college.